To explore the roots of theological anti-Semitism is an important project, far from finished. In a comment to an earlier blogpost, Kevin Edgecomb has made some important comments not so much to my own writing, as to David Robles’ comment (see Anti-Semitism in Eastern and Western theology). I have no special insights into the question of Orthodox saints or theologians being anti-Semitic or not. 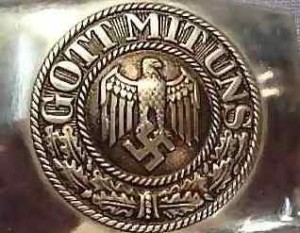 This is the belt buckle of the National Socialist soldiers: God with us. And this was what the Jews that were killed had to see on their way to the gas chambers.

But I think it is a key concern for anyone regarding classical Christianity important or even normative to deal with the role of the Fathers.

There is a long and tragic tradition of negative views on Jews, and even a negative hermeneutical tradition among many fathers. Let me begin by saying, that I do not belong to those Christians who disregard everything said by the Church Fathers, just because they have negative statements on the Jews. Such an attitude is to my mind brainless, or, perhaps even, heartless; what would we have done without Tertullian’s inventive theology, or Gregory’s? On the other hand, I think we must discern what is silver, gold, and precious stone, and what is straw. The anti-Jewish statements certainly belong to the latter.

Having always enjoyed the majestic worship of the liturgy bearing the name of Chrysostom, I, for example, was shocked when I began to read his vehement words about the Jews. I quote from a hitherto unpublished text of mine about this:

Tertullian is influential since he writes a tract with the title Adversos Judaeos, which would become the name of the entire tradition,  the so-called Adversos Judaeos tradition. This contained of  an allegorical anti-Jewish exposition of Old Testament texts. In this tradition the Old Testament promises pertain to Christians, whereas judgements pertain to Jews. Tertullian repeats (from earlier Fathers) that circumcision is a mark so that they may be punished, referring to texts like Is 1:2, 4, 7, 15; they will not enter into Jerusalem (Tert. Adv. Jud. 3). Cyprian’s influence mainly lies  in his extensive list of Scriptural arguments against the Jews, the so-called Testimonia, gaining great influence in the theology of the coming centuries. Later, the eastern church fathers also wrote strongly Anti-Jewish tracts. Gregory of Nyssa: “God-murderers, prophet-murderers, fighters against God, God-haters, they who transgress the Law, they who fights grace, they who have another faith than the fathers, advocates of the devil, brood of vipers, slanderers , those who have darkened minds, the leaven of the Pharisees, the sunedrion of the devil, Destroyers, thouroughly evil ones, the stoners, the haters of good. ”(Greg. Nyss. Or. in Christi Resurrect. 5). The beloved John Chrysostom is vehement in his assault against Jews.” (see his eight Orations against the Jews). Admittedly, this could be qualified even if not possible to make undone by saying that he in later texts he can acknowledge that God has not rejected his people (Homilies on Romans 18). In sum, these few examples show that this is no small problem in Patristic theology.

As anyone, who has studies the Fathers in this area knows,  these examples could be multiplied. This raises the question of how structural these views on Jews are in those Fathers who laid the foundation for the Christian faith? Is such an attitude to Jews and Judaism intrinsic to classical Christianity. Having done that, I think it is time to follow the further development of the faith. This would be a major research project, where scholars from many different fields would need to cooperate. I will come back to some clues to why the development went in such a negative direction. But please remember: whoever says that I hereby have rejected these Fathers altogether has misread me.

Comment4 | Share | Tweet | Share | print | email
Category: Blog
Disclosure of Material Connection: Some of the links in the post above are “affiliate links.” This means if you click on the link and purchase the item, I will receive an affiliate commission. Regardless, I only recommend products or services I use personally and believe will add value to my readers. I am disclosing this in accordance with the Federal Trade Commission’s 16 CFR, Part 255: “Guides Concerning the Use of Endorsements and Testimonials in Advertising.”

Please note: I reserve the right to delete comments that are offensive or off-topic.

He is President of Scandinavian School of Theology, Uppsala, Sweden, and Associate Professor in New Testament exegesis at Uppsala University.

Anders is married to Else-Marie, and they have three daughters and six grandchildren.