[This part of an article I wrote about Luther’s theology legitimizing pogroms.]

Texts written by theological professors are not innocent, and when the thought are implemented in ordinary church life, the theology comes alive. Just after the ‘Crys­tal night’ when synagogues all over Germany were burning, the Landes­bi­schof in Thüringen Martin Sasse wrote “On the 10th of November 1938, on Luthers birth­day the synagogues in Germany are burning”,[1] put to fire as they were the night before. 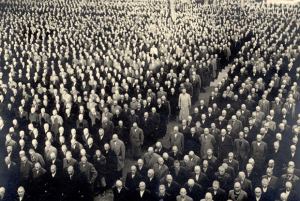 Jewish men from Erfurt lined up to be transported to Buchenwald, November 10, 1938

The pamphlet is 16 pages and my copy has the text “60.–100. Tausend”, meaning that it probably had great impact. Sasse does not say much himself, but lets Luther speak, predominantly from Von der Juden und ihre Lügen. Sasse does not regret that the synagogues are burning—to the contrary:

The bishop seems to see the burning of the synagogues on Luther’s birthday as a divine appointment, and regards the action by the German SA, SS and the mobs as necessary to break the alleged power over the Jews. “In this writing “Luther will speak to us in his own words,” and Sasse holds Luther’s voice to be more powerful than that of ‘friends of Jews and scribes (Schriftgelehrter)’ who no longer know about Luther’s stand.[3]

And Sasse can hardly find a stronger rhetorics than Luther’s in blaming (pp. 3–8) the Jews, and then telling what Luther demands (9–15). The first demands are presented as a subheading: “Away with the synagogues! Away with the Jews!” Sasse repeats the seven demands which end Luther’s writing from 1543, beginning with that God’s scharfe Barmherzigkeit demands “daß man ihre Synagogen und Schulen mit Feuer anstecke…”.[4]

By this the Landesbischof in Wartburgstadt Eisenach only demonstrates that the events in close-by Lutherstadt Erfurt on the 9th and 10th of November were no accident, when on the even to Luther’s birthday the magnificent synagogue was burnt to the ground. Practically enough the firecorps had unusually enough been called to the place before the fire. Why? To protect the surrounding buildings when the synagogue was to be burnt down! And the day after, all town marched with torches for the traditional Martinsfest, on Luther’s birthday celebrating Martin of Tours and Martin Luther.[5] Of course we cannot know what Luther or Vogelsang himself would have thought of this – even though no one can deny his very practical and down-to-earth advise to “Burn their synagogues!” And theological professors could very well be ‘armchair antisemites’, as e.g., Kittel criticising the ‘Radauantisemitismus’.[6] But what is written in the most pious book of the theo­lo­gi­cal professor and then spoken in the pulpit by bishops and ministers may become lethal when legitimating a political action like that in Erfurt and all of Ger­many on the eve to Luther’s birthday 10 November, 1938. Theological argument from the 16th century is reforged into a synthesis with voelkish-racist ideology. On a greater scale than Luther would have found possible, his thoroughly unethical words became political reality, not only with the synagogue in Erfurt. Hundreds of Jews were taken directly to nearby Buchenwald, as antisemitism went into a new more radical phase.

From the article: Gerdmar, A. (2013). “Luthers Kampf gegen die Juden”: A Völkisch Reception of Luther’s View of the Jews. Nordic Ideology between Religion and Scholarship. H. Junginger and A. Åkerlund. Frankfurt a M, Peter Lang. Vol. 24.

Comment0 | Share | Tweet | Share | print | email
Category: Blog
Disclosure of Material Connection: Some of the links in the post above are “affiliate links.” This means if you click on the link and purchase the item, I will receive an affiliate commission. Regardless, I only recommend products or services I use personally and believe will add value to my readers. I am disclosing this in accordance with the Federal Trade Commission’s 16 CFR, Part 255: “Guides Concerning the Use of Endorsements and Testimonials in Advertising.”

Please note: I reserve the right to delete comments that are offensive or off-topic.

He is President of Scandinavian School of Theology, Uppsala, Sweden, and Associate Professor in New Testament exegesis at Uppsala University.

Anders is married to Else-Marie, and they have three daughters and six grandchildren.